World’s Largest Containership Floated Out for MSC at Chinese Shipyard

The newest vessel, the MSC Tessa, has the same overall dimensions as the Ever Alot and Ever Apex recently delivered by Hudong Zhonghua, a division of CSSC. “While the main dimensions are unchanged, the company’s containership design team has optimized the ship’s superstructure, radar mast, and other related designs according to the characteristics of the ship owner’s operating routes.”

The result of the redesign is that the MSC Tessa is being rated with a loading capacity of 24,116 standard containers. Accordingly, the vessel is reported to have an increase in capacity of 112 TEU over the Evergreen vessels. The Evergreen ships by comparison are listed with a capacity of 24,004 TEU. The stacking design the shipyard reports for the MSC vessel permits boxes to be piled 25 layers high.

The shipyard developed the design with its internal design team and is calling the vessels the “Hudong-type” class. They measure approximately 1,312 feet in length with a beam of 202 feet. The shipyard points out that they are 196 feet longer than the largest aircraft carrier and have a deck area equivalent to four football fields. 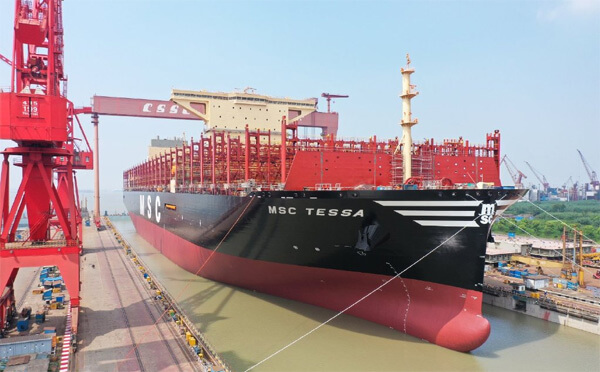 The design incorporates several features which are reported to improve their energy efficiency. They have a small bulbous bow, large diameter propellers, and energy-saving ducts. The MSC Tessa is also the first newly built ship for the line and the shipyard to employ an air lubrication system for the hull which they estimate will reduce fuel consumption by three to four percent. The design also used a shaft generator system to reduce fuel consumption and optimize the vessel’s EEDI energy efficiency rating. They also are outfitted with a hybrid scrubber unit.

The shipyard expects to deliver the MSC Tessa this year. It is the first of four vessels being built by the yard. Block assembly for the second and third vessels was started simultaneously in two drydocks at Hudong Zhonghua on June 13 shortly after work resumed from the COVID-19 lockdowns in the Shanghai area. The shipyard reports it is using a batch construction method to speed the work on the two ships and improve efficiency in the construction process. Work on the fourth vessel for MSC began after the first vessel was floated out. 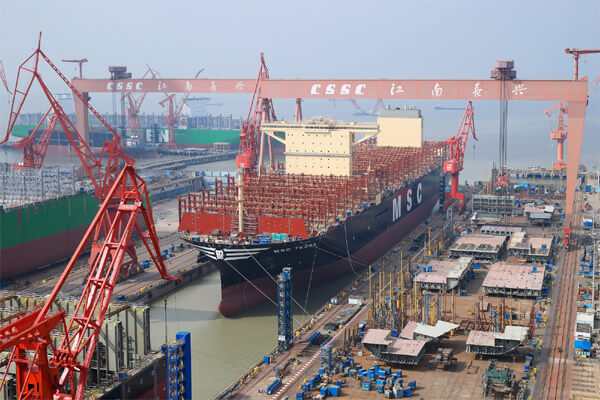 Hudong Zhonghua reports it has built four of the 24,000-TEU containerships and had two at the fitting out dock in June nearing completion and delivery. Evergreen took delivery on Ever Alot on June 22 and Ever Apex on July 11. Images of the float out on August 1 show another Evergreen boxship at the fitting out dock and a second one under construction in the dry dock.

The new ships are the latest in MSC’s extensive orderbook. According to Alphaliner, MSC currently has 114 ships on order which will have a total capacity of approximately 1.5 million TEU. That represents a third of the current fleet’s size, but some of the vessels are likely replacements for older ships. Since surpassing Maersk at the beginning of 2022 to become the largest container shipping company, MSC has continued to build its lead. Alphaliner reports MSC has a 17 percent market share with a fleet of 690 vessels with a total capacity of 4.47 million TEU.

Why I don’t need daily housekeeping, and maybe you don’t either

You can currently buy points and miles with up to a 145% bonus — but should you?

U.S. Navy’s MSC Sends Ship to India for Repairs for the First Time

What not to pack for your cruise