Lindblad Expeditions is preparing to launch its new cruise ship acquired last year from Genting Hong Kong and Crystal Cruises as the financially troubled organization began to downsize. The ship has been rebuilt and rechristened the National Geographic Islander II before starting operations in the Galapagos on August 19. It is also part of a trend by the tour operators to enhance the luxury offering for this unique cruise destination.

The new cruise ship arrived in Ecuador late last most and received a blessing and visit by government officials on July 29 before repositioning to the Galapagos. Attendees for the ceremonies included Ecuador’s Minister of Tourism, Niels Olsen and the Minister of the Environment, Water and Ecological Transition Gustavo Manrique, as well as industry colleagues, local partners, and members of Lindblad’s crew.

The cruise ship along with a sister ship was built more than 30 years ago and has had a diverse career. Originally ordered by a start-up that planned to call itself Windsor Line and sail this ship as Lady Diana along with her sister ship Lady Sarah, but the company was unable to take delivery. They briefly saw service as Aurora I and Aurora II before being acquired by Star Cruises in 1994 and being renamed Megastar Aries and Megastar Taurus.

Crystal acquired the Megastar Taurus in 2015 and refurbished her into a high-end, luxury cruising yacht renamed Crystal Esprit. She continued to cruise till 2020 but was laid up due to engine problems. Genting Hong Kong offered her for sale but had to agree to complete the engine repairs before handing the ship over to Lindblad which paid a reported $13 million for the ship.

Lindblad has now completed an extensive makeover of the ship with additions to tailor her to the Galapagos market, including the addition of a science lab and an expanded outdoor cafe. The 3,370 gross ton cruise ship offers all-suite accommodations for 48 passengers in 26 suites. According to Lindblad, the ship is well suited to the Galapagos and features amenities including a marina which will be used with the ship’s fleet of kayaks, Zodiacs, and stand-up paddleboards as well as a special glass-bottom Zodiac. 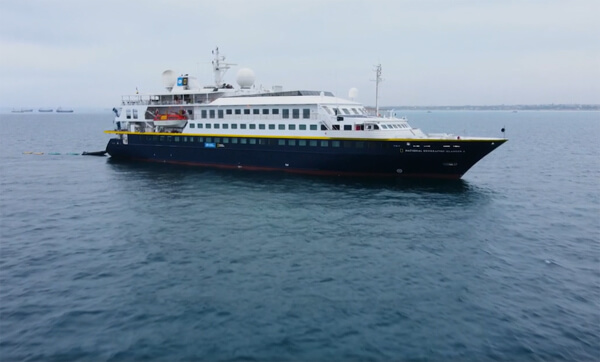 “Lindblad Expeditions is a great example of how to use tourism as a vehicle for conservation and development – how they are buying supplies from the local communities, employing people from Ecuador to connect the local cultures, and introducing their guests to our amazing cuisine,” said Minister Olsen.

In an odd twist of fate, while the one sister ship will be offering luxury cruises, the liquidators for Genting Hong Kong sold the other sister ship, which had been operating as a casino, luxury yacht, and private charter vessel. Known as The Taipan she was acquired by a Christian charity organization, OM, which plans to relaunch her in 2023 as the Doulos Hope, a missionary ship expanding the group’s work with impoverished and developing nations.

Average Toronto price for an unfurnished one-bedroom apartment is almost $2,000

Average Toronto price for an unfurnished one-bedroom apartment is almost $2,000

Ski-season flights to Colorado for less than $200 round-trip

The ultimate guide to the Bilt Rewards program — The Points Guy

Do you own cruise line stocks? You could get onboard perks