The late summer hum of cicadas might not be the only buzzing you hear in Toronto to close out the season. The region is now at the height of wasp season, and unlike their threatened bee brethren, these stinging, striped insects can jab you repeatedly.

If that wasn’t bad enough, wasps are out in abundance this year.

Rebecca Morton of Toronto-based Armour Pest Control explains to blogTO that the city reaches peak wasp season in late summer, and a combination of hot weather and lack of precipitation this year puts wasps and humans at increased risk.

Morton explains that there are many different types of wasps to be aware of in Toronto, “but the yellow jacket is the most prominent.”

“They are dangerous insects with their stings having a severe localized reaction to an anaphylactic shock. They tend to be attracted to garbage, food — particularly sugar-based food — perfume, cologne and meat products.”

But even if you’re a super-clean, sugar-free vegetarian who avoids wearing any scent, that doesn’t mean you’re safe from a sudden swarm of pissed-off wasps giving you a very bad day.

If your home or yard offers them a hospitable place to plot their menacing attacks, wasps will happily set up shop. And they’re coming into contact with people more often this year due to the weather conditions in Toronto this summer.

Wasps will build nests in areas like sheds that put them into contact with people. Photo by Rebecca Morton.

Morton warns that wasp nests reach their maximum size in September, and they can be found “in any void including, walls, soffits, and even unexpected places like boxes.”

“The nest is created and ruled by the queen who, after mating with a male wasp in the autumn, will overwinter, store sperm and go dormant. In the spring, when she becomes active, she will lay eggs which will become female worker wasps (the nasty ones who sting).” 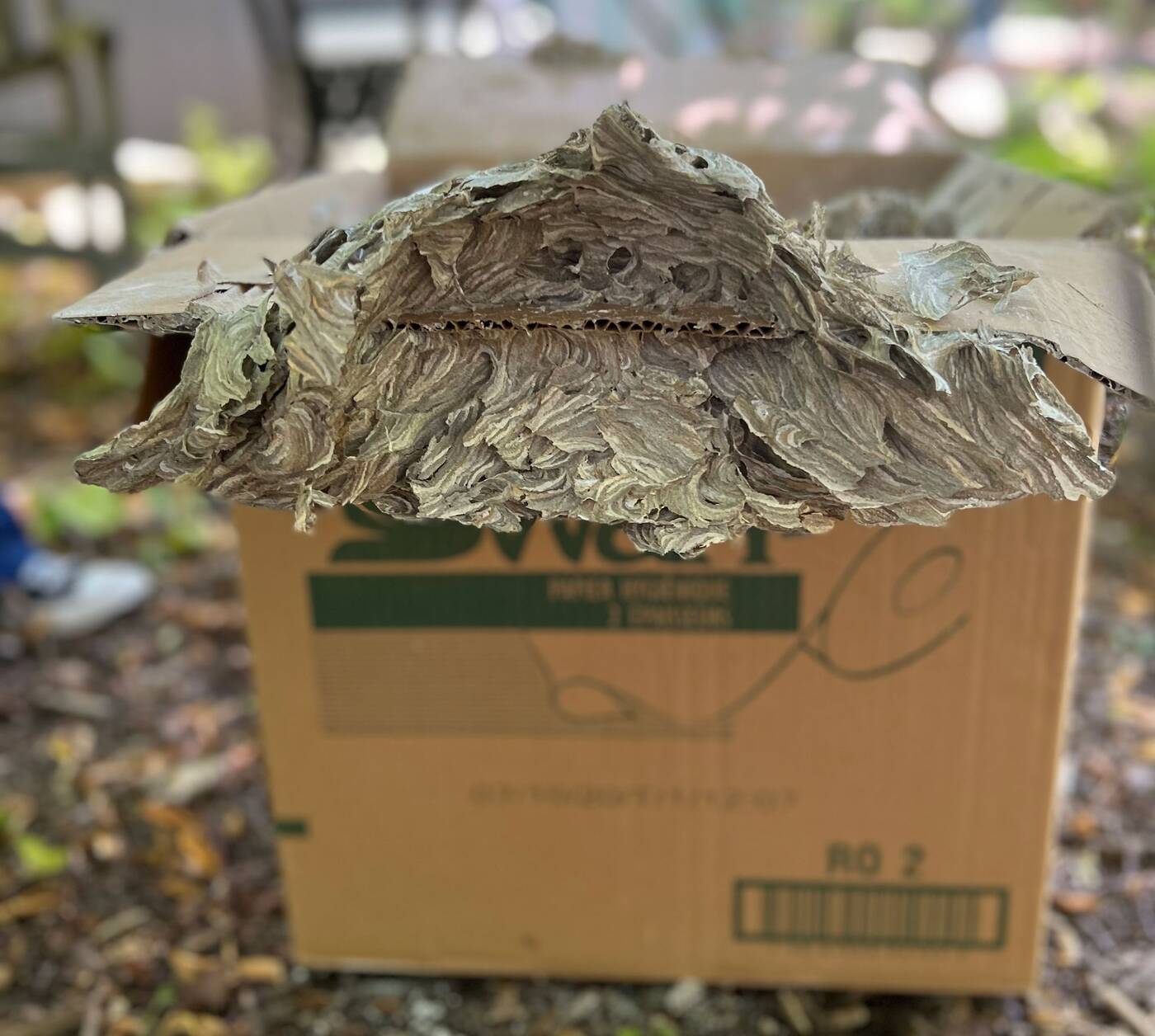 A cardboard box overflowing with a nest. Photo by Rebecca Morton.

And you can encounter a nest just about anywhere. Indoors or out. The pesky insects will even transform an unattended cardboard box or rolls of toilet paper into their own little honeycombed haciendas. 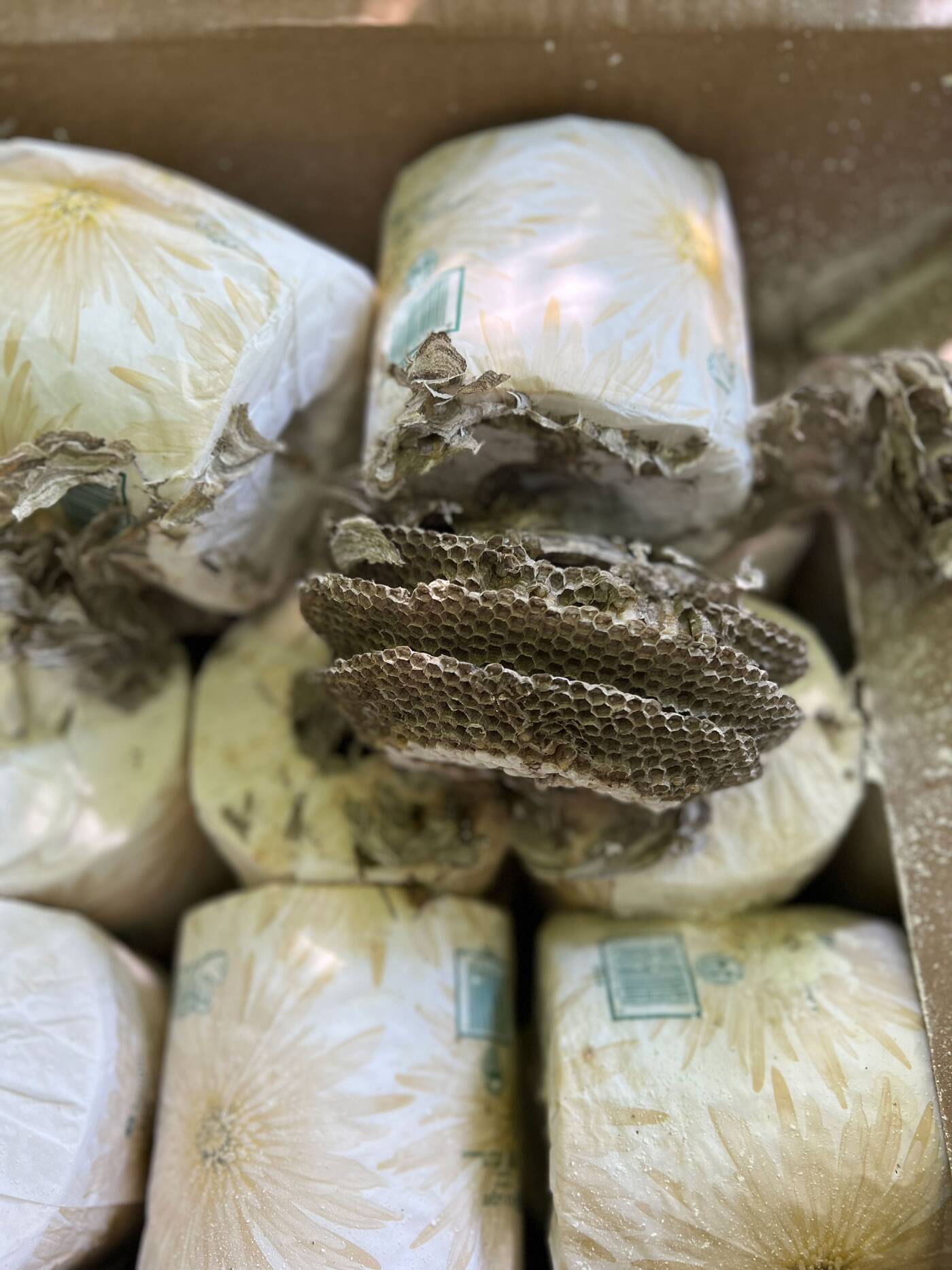 Wasps will even build nests in rolls of toilet paper, for anyone still hoarding boxes from 2020. Photo by Rebecca Morton.

Queens will continue to lay eggs throughout the summer months, but it’s around September that the reserve of…ummm…reproductive material…is exhausted. The end of summer also marks the point where male wasps are born and leave the nest in search of females to make new queens.

Meanwhile, female workers that have been busy collecting and feeding their larvae protein-rich diets have run out of sugar secretions produced by the larvae for the hive. This, Morton explains, is why wasps are drawn to your picnics and patio gatherings.

So, basically, all the wasps are out searching for food and mating opportunities at the same time, their nests are as large as they can get, and they’re looking for a warm and safe place to call home for the winter.

At least it isn’t murder hornets.

9 unique fall foliage experiences in the US

9 unique fall foliage experiences in the US