Parks meander like streams through Toronto’s Avenue/Lawrence and Yonge/Lawrence neighbourhoods. These winding routes almost seem designed to offer perfect shaded routes for dog walkers, but their curving, seemingly arbitrary paths exist due to buried waterways that long predate the grids of roads and affluent homes surrounding them.

Many know the story of Garrison Creek passing through parks like Trinity Bellwoods, but a less-discussed example is Brookdale Park, a 1.5-hectare space extending for several blocks northwest of Avenue Road north of Lawrence Avenue West, starting at Woburn Avenue and terminating at the intersection of Grey Road and Fairlawn Avenue.

Brookdale Park exists on the path of a now-buried stretch of Burke Brook, a tributary that feeds into the West Don River at Sunnybrook Park, and one of the city’s many buried rivers and streams. 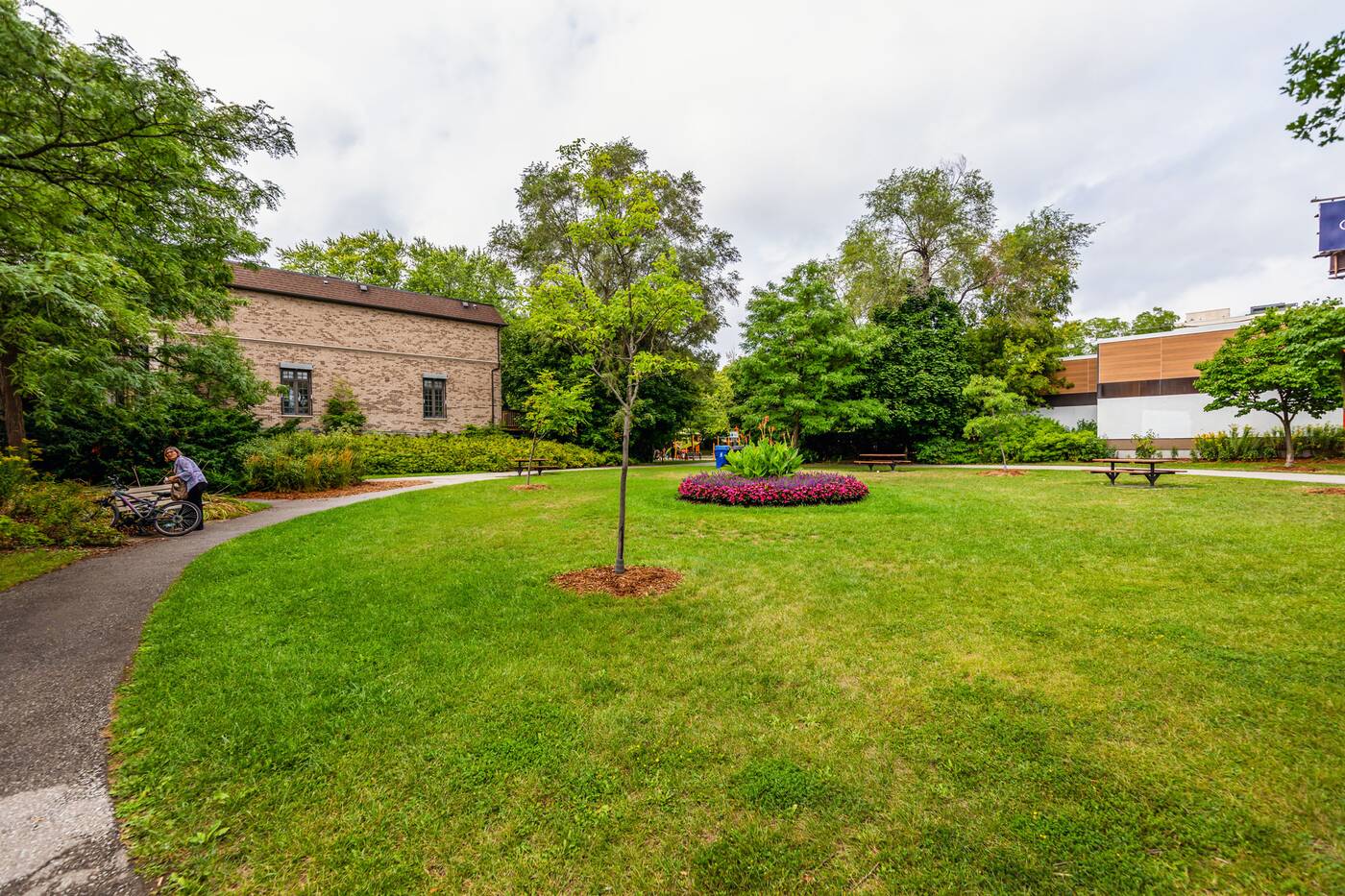 Much of Burke Brook, including its northern stretch through what was once the pre-amalgamation City of North York, was buried in 1931 and 1949, effectively becoming a storm sewer and creating new park space for the expanding postwar suburbs in the process. 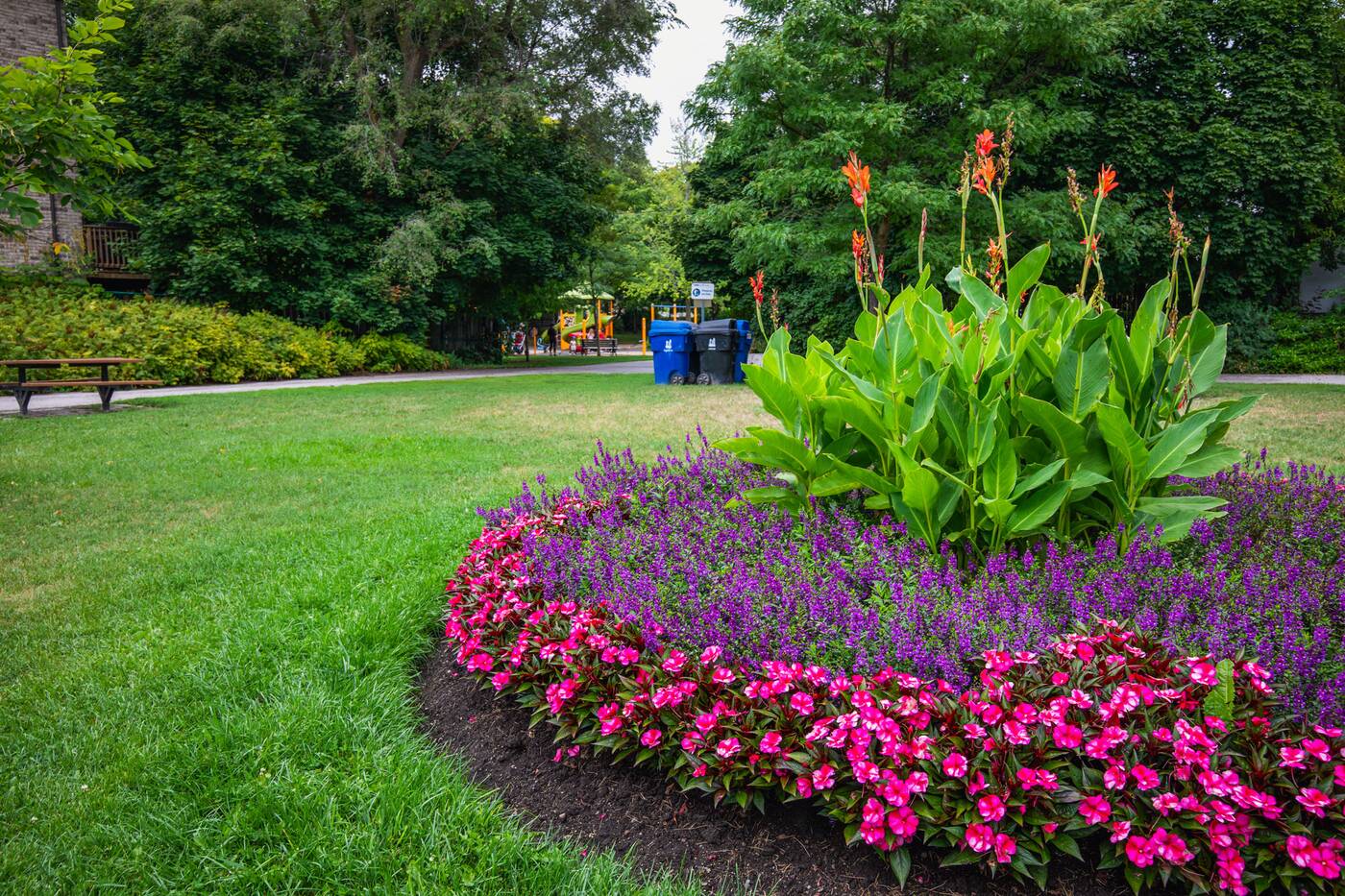 The mostly buried stream was largely replaced by or rerouted into the North Toronto Storm Trunk Sewer, installed starting in the 1960s. But it wasn’t until the 1990s that the path of the stream was united as parkland and extended out to Avenue Road. 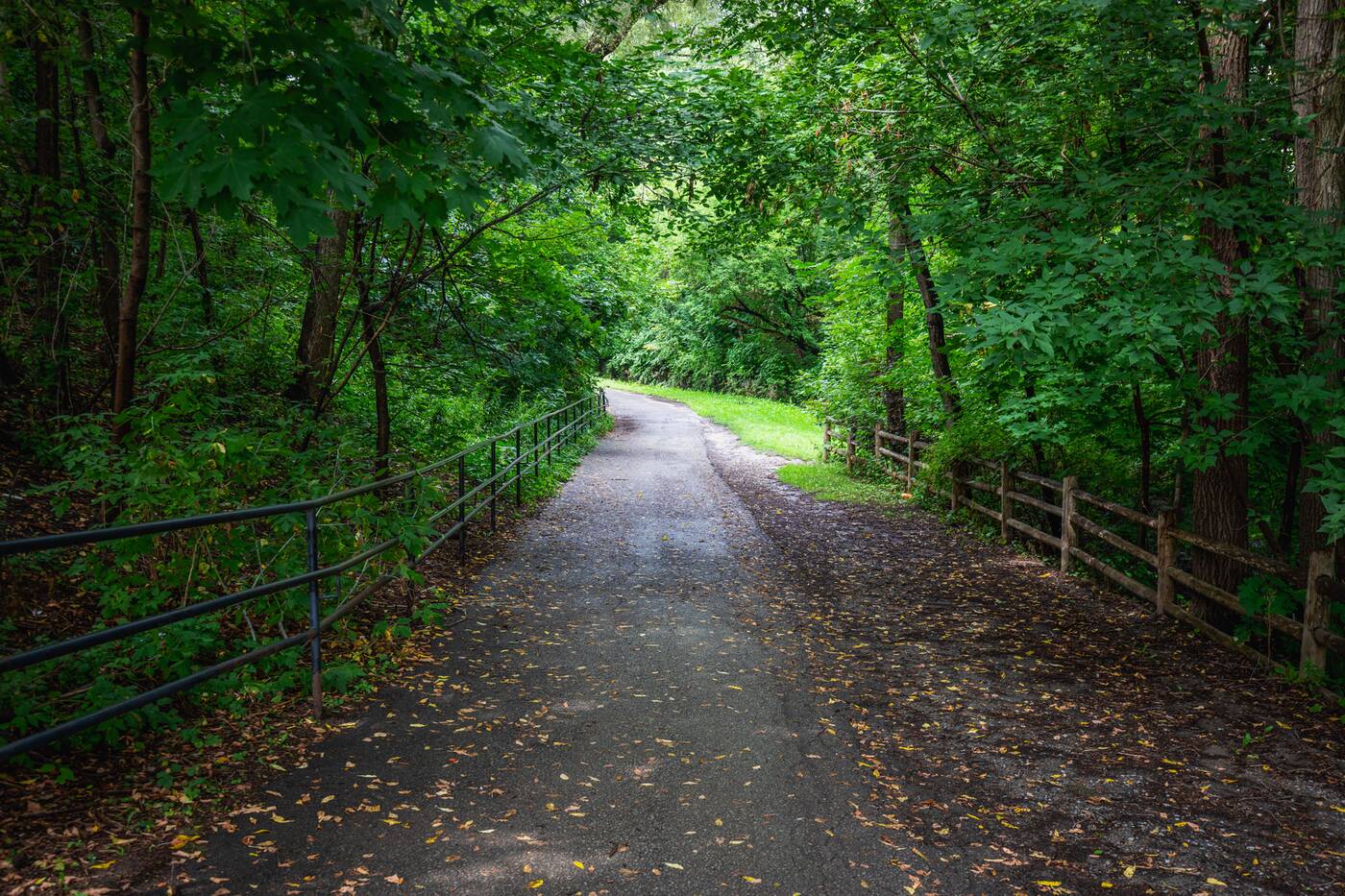 It offers what you’d expect from a small neighbourhood park, with a garden and children’s playground near its south end, and a winding trail carving through the surrounding blocks. 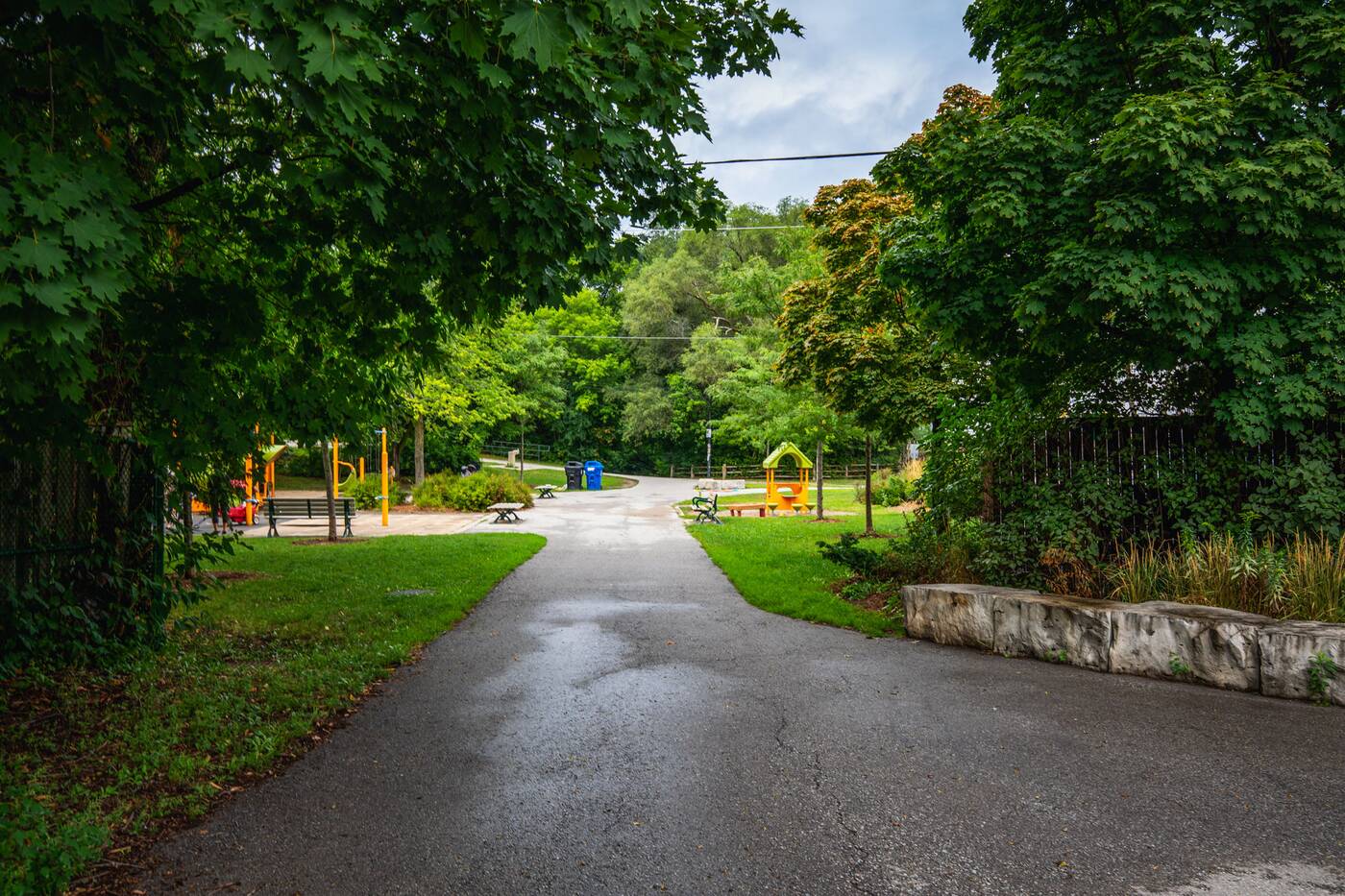 It also features an unimpressive, channelized waterway between Brookdale and Cranbrooke. 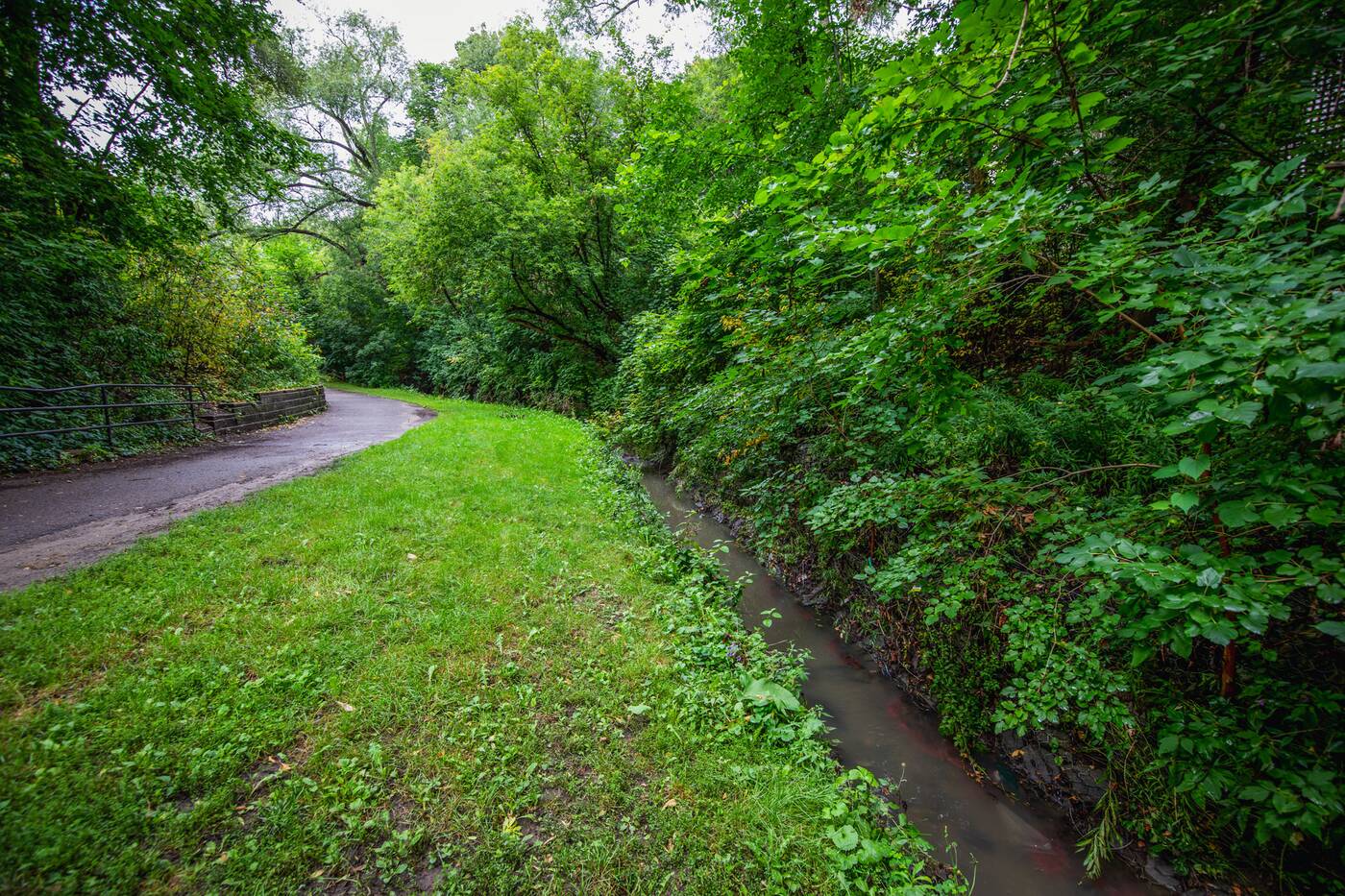 And though the brick and wire-lined watercourse isn’t much to look at (or smell) this short daylight stretch of Burke Brook is a lasting reminder of the natural terrain that came before the big city of today. 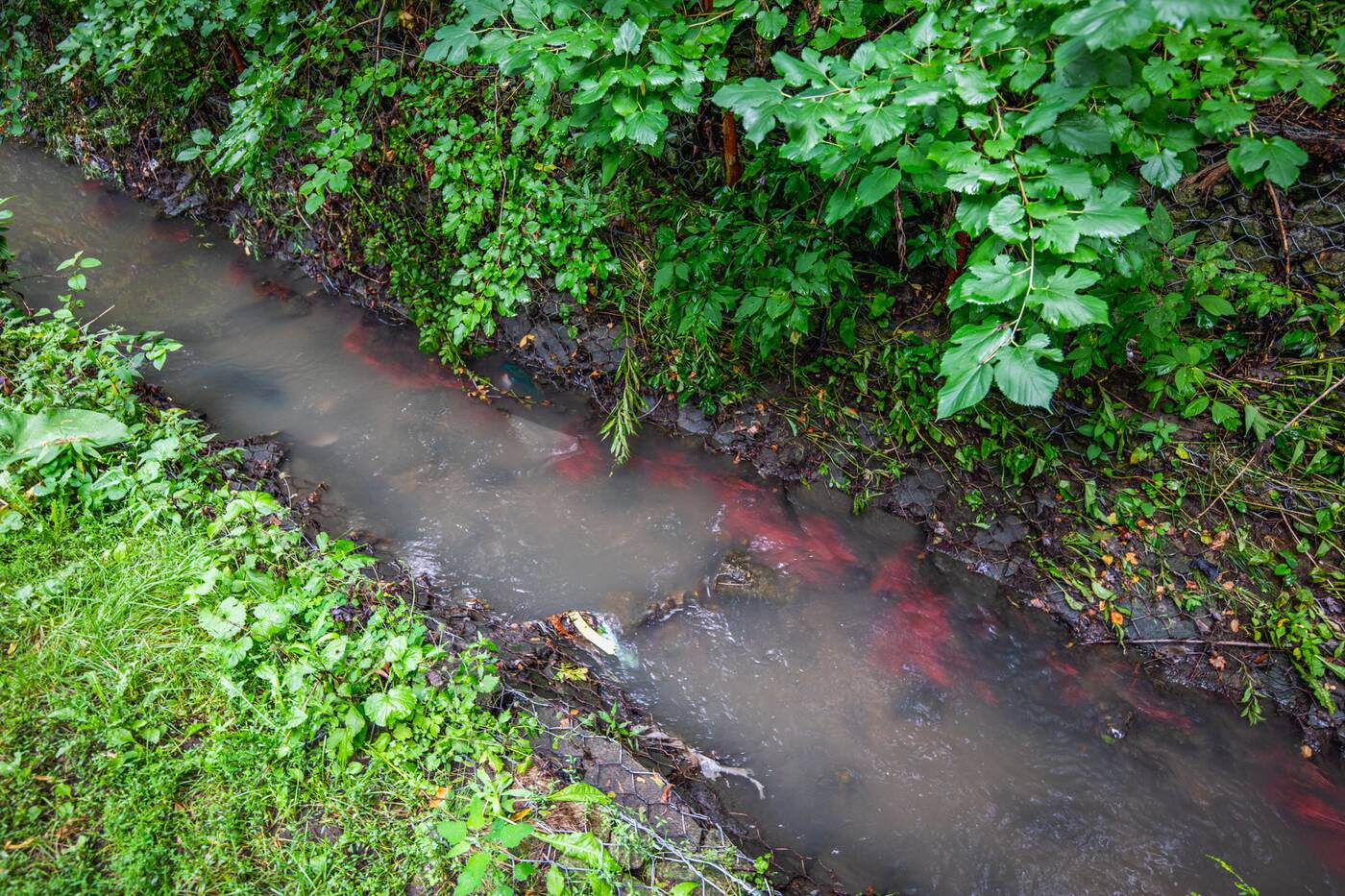 A walk along this quiet path includes crossings at side streets with opportunities to stop and gawk at multi-million-dollar homes. 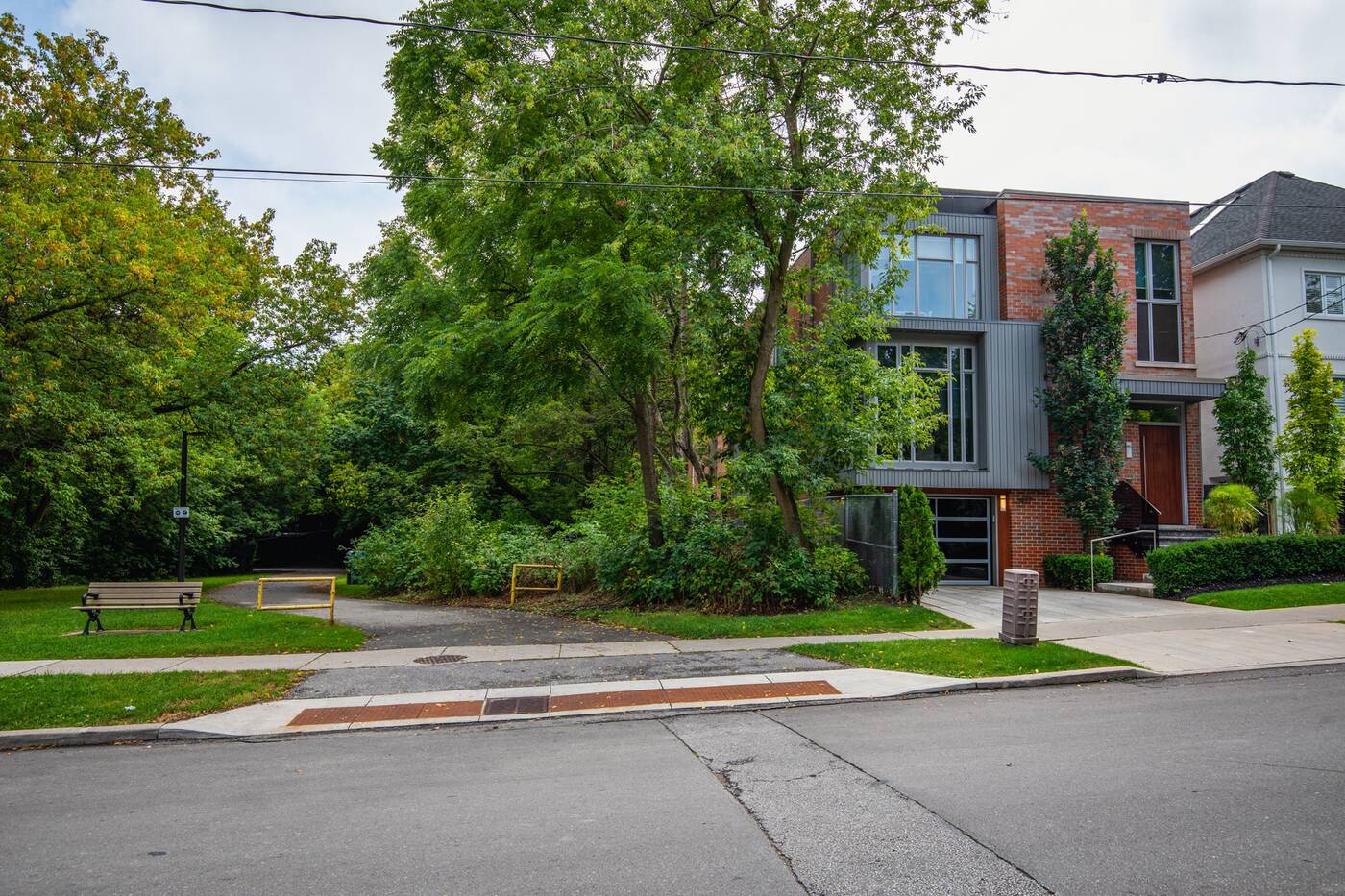 Or maybe just some open space to allow that other dog to pass so your furry friend will stop barking. 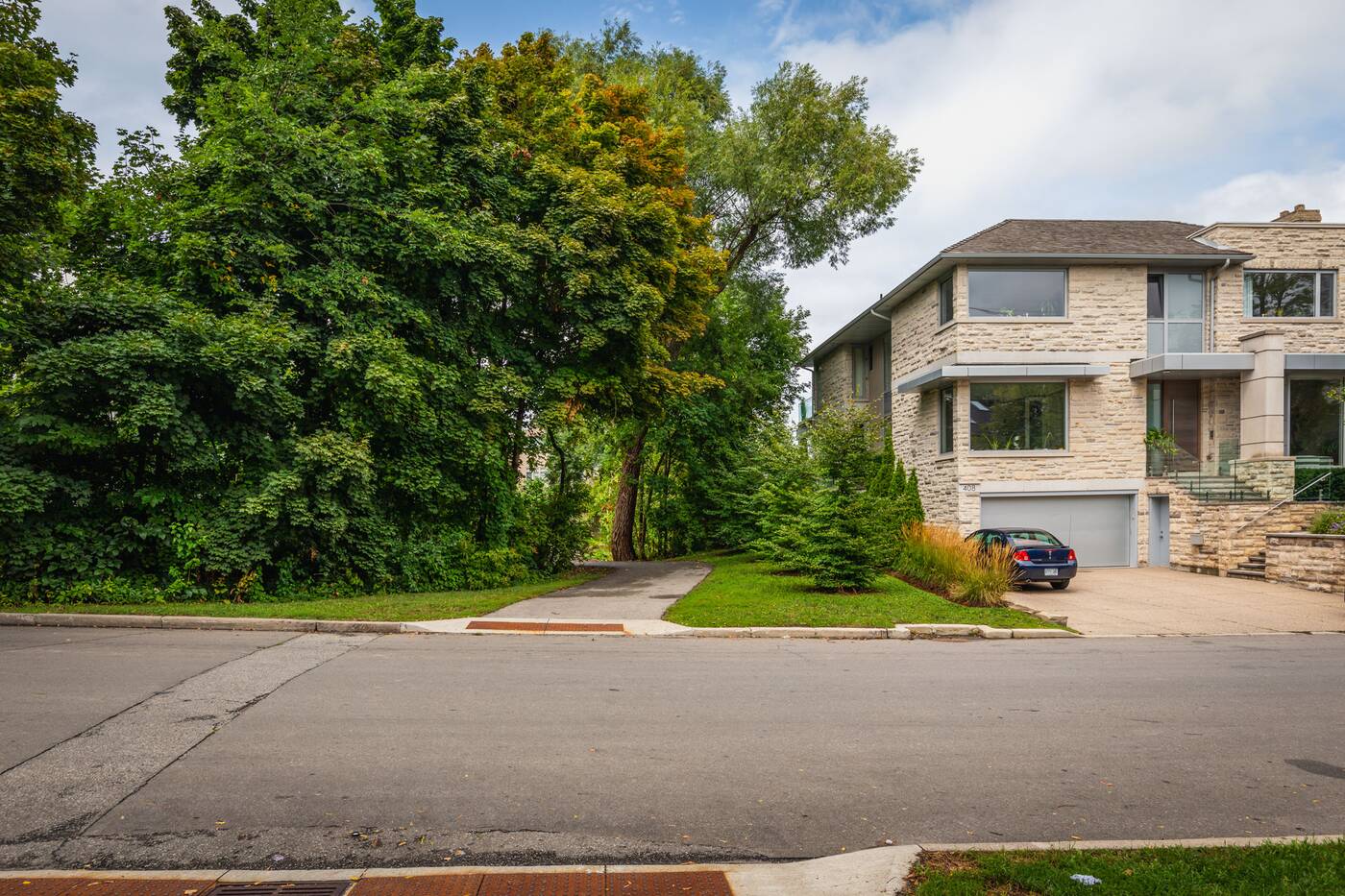 You can even see ditches marking the path of the long-buried river, and on a rainy day, you can easily hear the rushing storm sewer below through the steel sewer covers embedded in the asphalt.

This Toronto park hides a buried river. Any guesses where it could be? 🌿

Like the river before it, the park snakes between the backyards of homes in the area. 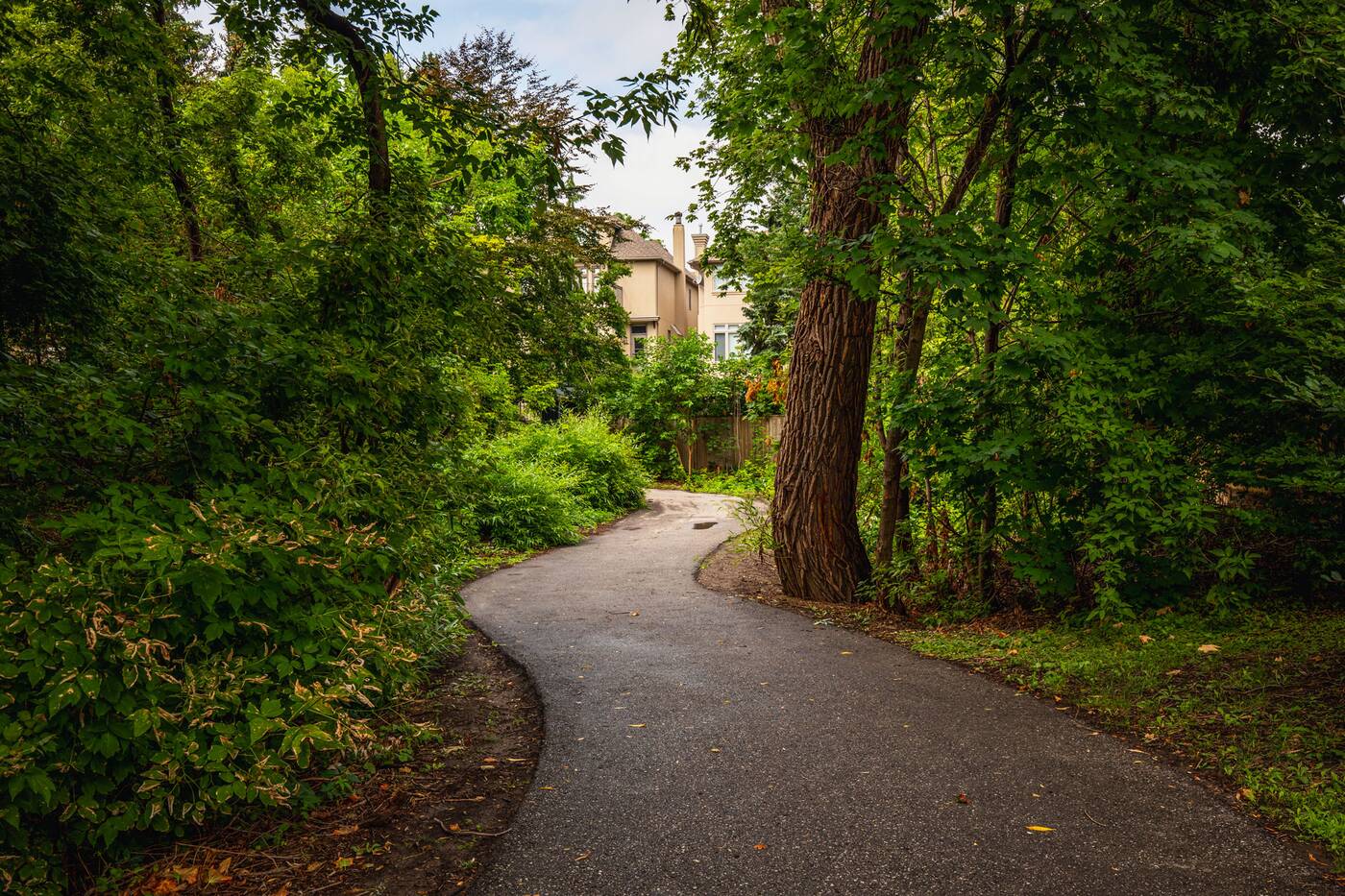 One house along the path even features its own private gated entrance to the park. 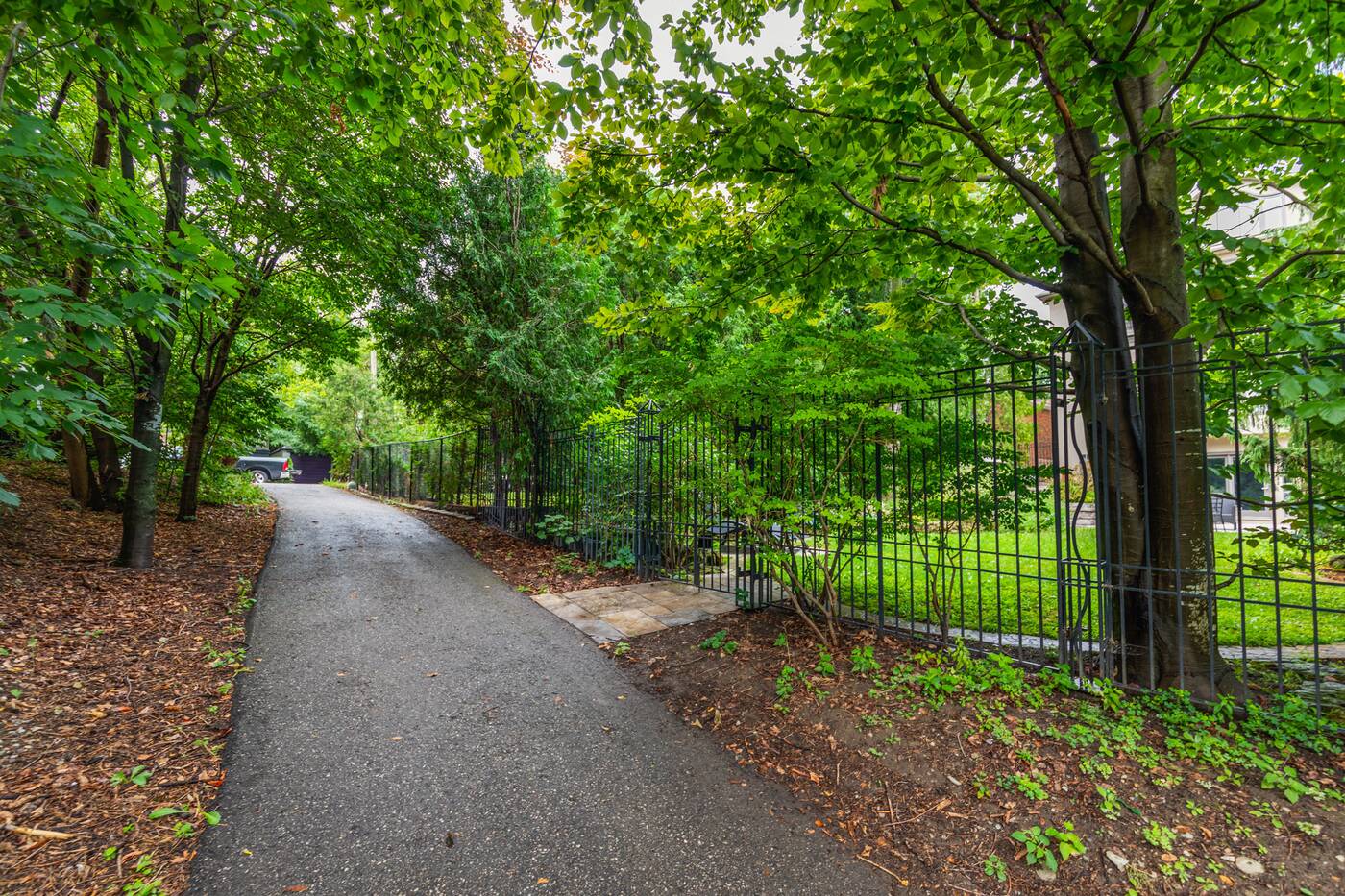 Further buried sections of Burke Brook exist a few blocks north of Brookdale Park, with Old Orchard Park and Grey Park located opposite one another. 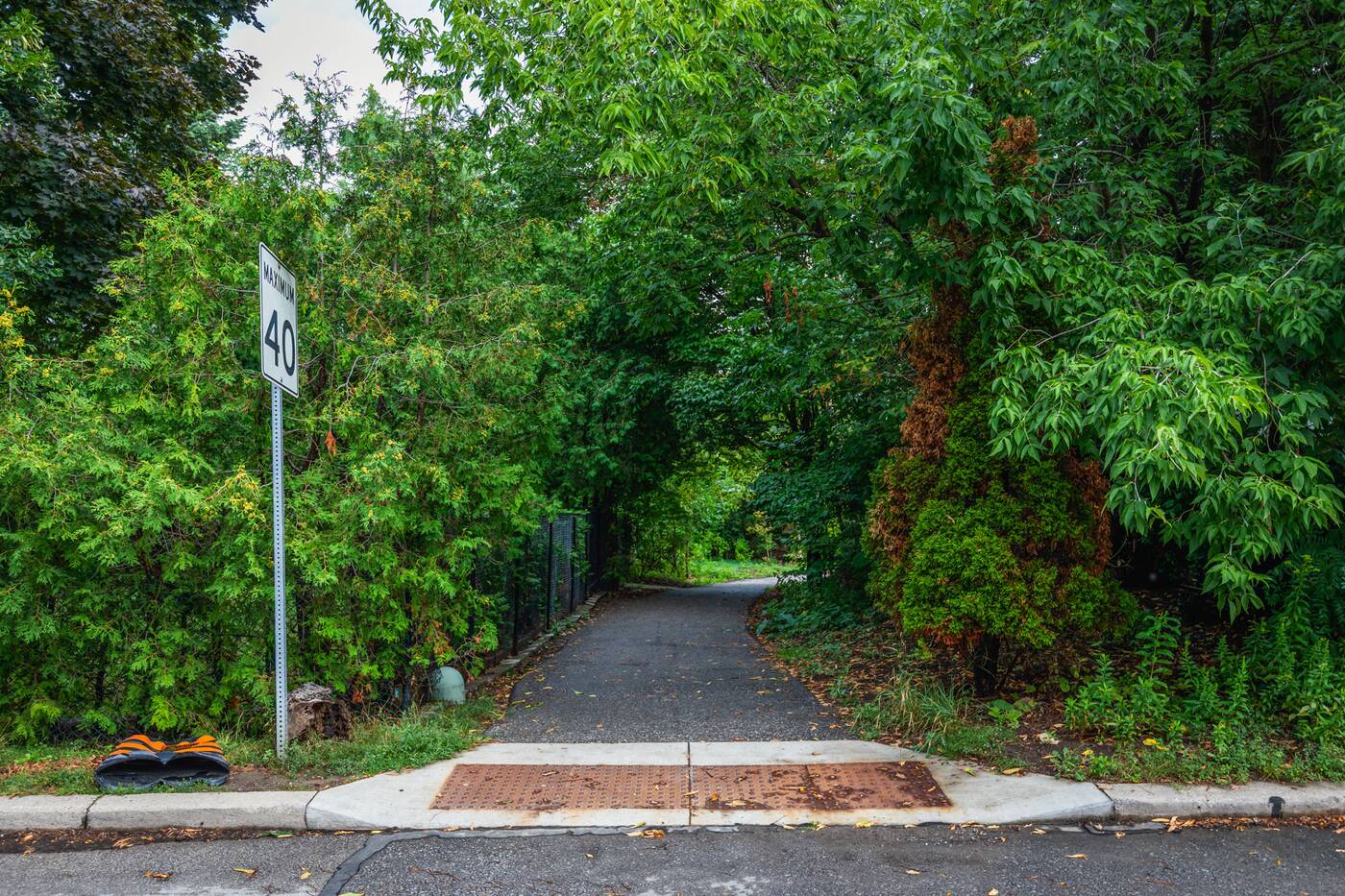 Southeast of the park, Burke Brook flows below a private condo development, then Lawrence Park Collegiate Institute and Glenview Senior Public School yards before passing through the Chatsworth, Lawrence Park, and Blythwood ravines (largely buried with culverts and partial open sections) and onto Sherwood Park, where it now surfaces as the stream’s only remaining, somewhat natural stretch.

Placing artificial nature atop a natural waterway seems like an odd way to approach park-building, but it was not uncommon in the postwar boom years, marked by high pollution and even higher infrastructure spending.

In fact, you can find similar green spaces atop buried streams and rivers all over the city, but the scars of lost waterways are prevalent in the area surrounding Brookdale Park.

About 800 metres west of Brookdale Park, another very similar string of connected greenspaces known as Woburn Park spans a roughly 500-metre stretch that takes it across five streets.

Like its neighbour to the east, the park is built over another stream — Mud Creek — that last saw daylight in 1949.

Royal Caribbean Plans to Roll Out Starlink Internet Across its Fleet