Viking launched its new Mississippi cruise operation, its first in the United States, on Saturday, September 3, after seven years of planning. The new river cruise ship Viking Mississippi embarked its first passengers at Lambert’s Landing in downtown St. Paul, Minnesota for an 8-day cruise south on the Mississippi to St. Louis, Missouri.

It marked the latest expansion for the company best known for its European river cruises. Viking also recently launched its new river cruise ship operating on the Nile in Egypt and expanded its ocean cruises with its first exploration cruise ship that is currently operating cruises on the Great Lakes.

The entry into service of the 450-foot long river cruise ship however had been delayed several times and had to overcome opposition to the company based in Switzerland operating an American flag vessel. Opponents had repeatedly cited the planned operation as a violation of the Jones Act. U.S.-based partner Edison Chouest Offshore built the new vessel and it is owned by an American LLC corporation chartered to Viking for eight years. The U.S. Maritime Administration has repeatedly ruled that the charter arrangement meets U.S. regulations. 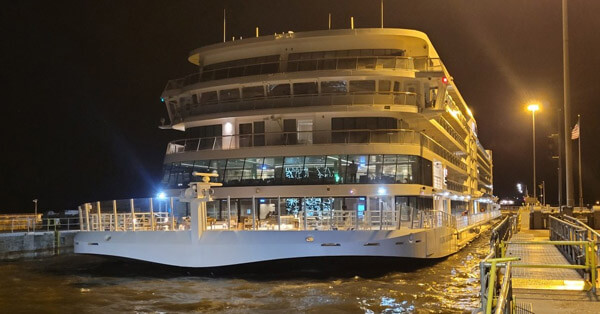 Viking first announced its plans to expand its operations to the Mississippi in 2015. At the time they said they planned to order two vessels to be owned by Tennenbaum Capital Partners, an investment firm, later acquired by BlackRock and now operating as BlackRock TCP Capital Corp. Viking’s original announcement said that they planned to build a total of six vessels to operate on the Mississippi. The company was to be homeported in New Orleans. Viking, however, spent years making presentations to cities along the Mississippi to win docking rights while searching for partners and perfecting the design for the vessels to meet the challenges of operating the length of the Mississippi.

Local media reports suggested that as many as 300 people were boarding the delayed maiden voyage for a trip that will take them to ports in Minnesota, Wisconsin, and Iowa, before arriving in Missouri. After repeating this itinerary, the vessel will reposition to operate cruises between Memphis, Tennessee and New Orleans, Louisiana as well as round trips from New Orleans.

The vessel was specifically designed for the Mississippi drawing on the features of the company’s river and ocean cruise ship while adding features unique to its operations on the Mississippi. It has five passenger decks and a total of 198 passenger cabins accommodating 386 passengers. The crew numbers 148 and are Americans to meet U.S. requirements.

Passenger amenities include a two-story lounge near the bow of the vessel surrounded by glass and an outdoor seating area. In addition to a main lounge and dining room, there will be alternative dining, including indoor-outdoor casual spaces. There is also a sun terrace with an infinity plunge pool and a 360-degree promenade deck.

The vessel was floated out in March 2022 from the shipyard in Houma, Louisiana with plans to enter service in June. Viking, however later reported that due to circumstances beyond its control, the maiden voyage was delayed. Reports indicated that they experienced supply chain challenges and the vessel required finishing touches to be ready for this week’s first cruise.

The departure from St. Paul yesterday also marked the first time in possibly a decade or longer that a large cruise vessel called in the city, with the tourism board telling reporters it was “huge for us.” The tourism board however told the Pioneer Press newspaper that they had opted for “a low-key arrival,” on Saturday, telling the newspaper “Let’s just get this first one under our belt.”

The cruise line has released itineraries for the Viking Mississippi through 2024 and reports strong interest. Some trips already show as sold out on the website. The company has not yet announced plans for additional Mississippi river cruise ships and if it still plans to ultimately build six vessels for the river.