To Rebuild a Degraded Reef, Play the Sounds of a Healthy One

Imagine you’re in a food court and spoilt for choice. How will you choose where to eat? It might be the look of the food, the smell, or even the chatter of satisfied customers.

Marine animals do the same thing when choosing a good place to live. Even seemingly simple creatures such as marine larvae use sight, smell and sound as navigational cues. Once we understand these cues, we can use them to help nature recover faster than it would on its own.

In our new research, we amplified the natural sounds of the sea through underwater speakers. We were testing if sound cues would draw baby oysters to swim to the locations where we are trying to regrow oyster reefs. It worked better than we’d hoped. Many thousands more larvae swam to our locations than control areas and settled on the bare rocks.

Why can’t these reefs return naturally?

Oyster reef restoration is gaining momentum in Australia and globally as a way to restore healthy ecosystems. Reefs of shellfish filter and clean vast volumes of water as they feed, while their shell piles provide habitat for fish. Oysters are also food for many marine species.

These highly productive shellfish reefs once spanned thousands of kilometres of Australian waters, but more than 90% were dredged up for food and or to use their shells as lime for cement during the early colonial years.

When we try to restore these reefs, however, we hit a problem. Free-swimming baby oysters need to find the boulders we drop onto sandy seafloors at our restoration sites. 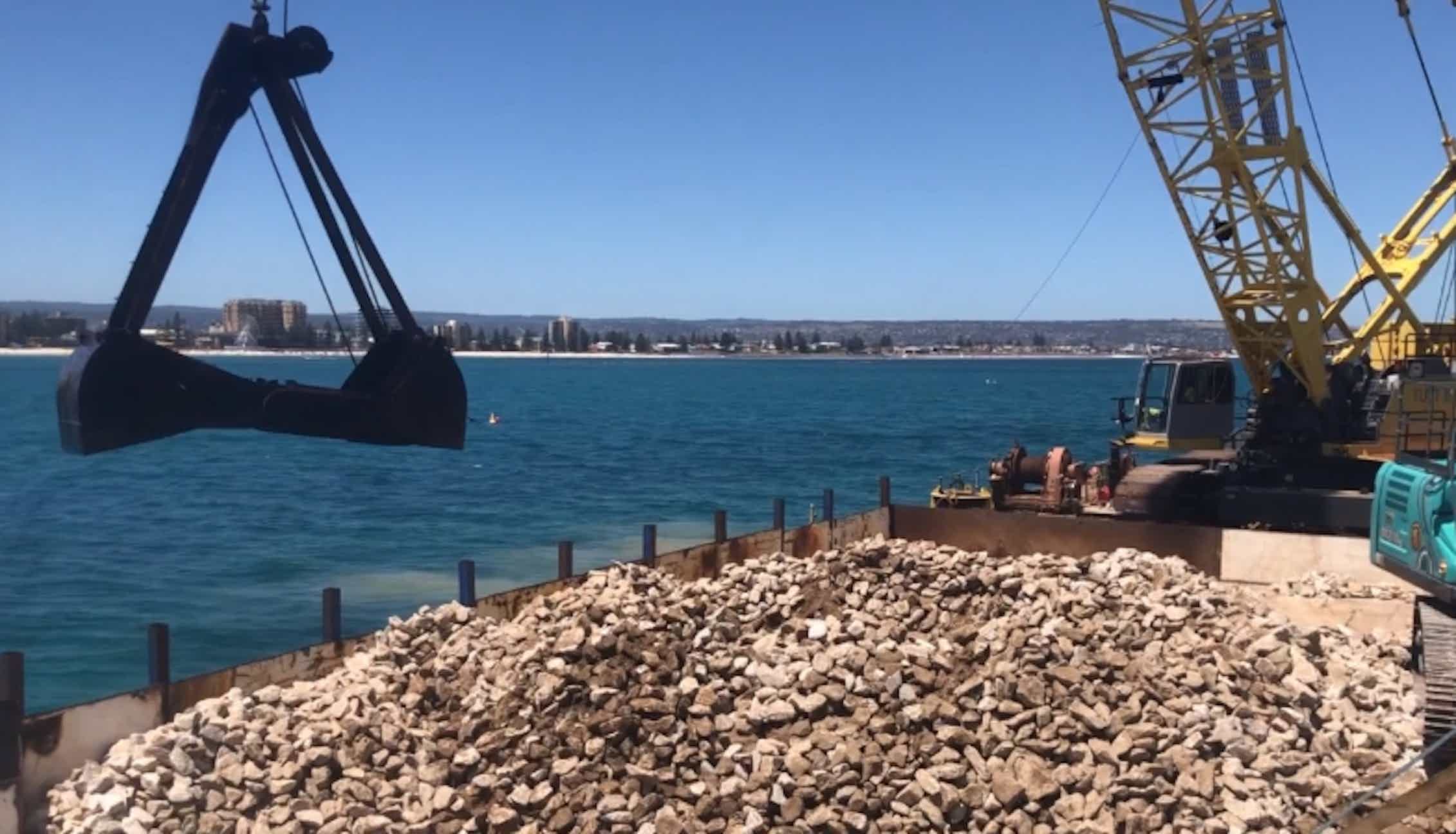 Restoring shellfish reefs starts with a limestone base, as in this construction image of the Glenelg oyster reef project. Maritime Constructions, CC BY

That’s where our siren songs come in. Many marine animals use sound like we use sight on land. Think of whalesong, which lets whales communicate over long distances. Sound is more useful than sight or smell underwater because it can carry information a long way – much further than you can see – and without getting pushed about by ocean currents.

If you’ve snorkelled on a coral or rocky reef, you’ll know healthy reefs are surprisingly noisy. As you float over the reef, you hear a cacophony of sound: crackles and pops from fish as they feed and invertebrates like snapping shrimp.

If this soundscape is present, it tells oyster larvae it’s a healthy habitat. And because sound travels so well, the soundscapes are broadcast a decent distance. That’s why it’s such a useful cue if you’re a baby oyster looking for a rock to settle on and begin growing your shell.

To test if this works outside the laboratory, we recorded sounds from the healthy Port Noarlunga Reef in South Australia. Then we played these sounds underwater near two large reef restoration sites offshore from Adelaide and the Yorke Peninsula.

This attracted up to 17,000 more oysters per square meter to our restoration sites. Not only that, but over the next five months, close to four times more large oysters grew in our test areas, which accelerated habitat growth. By contrast, the areas where we played ambient sound from oyster-free areas produced only stunted habitat with few oysters settling.

Hang on, oysters can hear?

The way we hear is based on the pressure of soundwaves hitting our eardrums. Marine mammals like seals and dolphins hear this way too. But fish and marine invertebrates such as oysters are different.

Oyster larvae are brainless and earless, but they are certainly not clueless. Like fish, they hear by detecting and interpreting the movement of water particles stirred up by soundwaves as they pass. Soundwaves alternately squish and stretch water particles, sending vibrations in the direction the soundwave is moving. Oysters sense this motion with tiny sensory hairs, or with statocysts, sensory organs used for balance and orientation.

Despite being only the width of a human hair themselves, larval oysters use these organs to follow these vibrations back towards the healthy reef producing the sound. In adult oysters, the tiny statocyst is near impossible to find. But swimming oyster larvae project their statocysts out in front of them, presumably to improve navigation and interpret marine sounds.

The reefs are alive with the sound of music

Researchers and community groups around the world are launching restoration efforts to repair some of the damage we’ve done. In Queensland, for instance, fishing communities in Moreton Bay offshore from Brisbane plan to restore 100 hectares of oyster reef over the next decade.

While exciting, success isn’t guaranteed. It can be hard to restore ecosystems which haven’t existed for a century. And it can be expensive to get large stocks of larvae.

This technique – and others like it – could help improve how many baby oysters or other keystone species actually make it to their new homes and start the great task of reef-building.

Researchers have discovered fish can be attracted to coral reef sites by playing healthy reef noises, and it has long been known that birds can be drawn to specific nesting sites by playing their social calls. 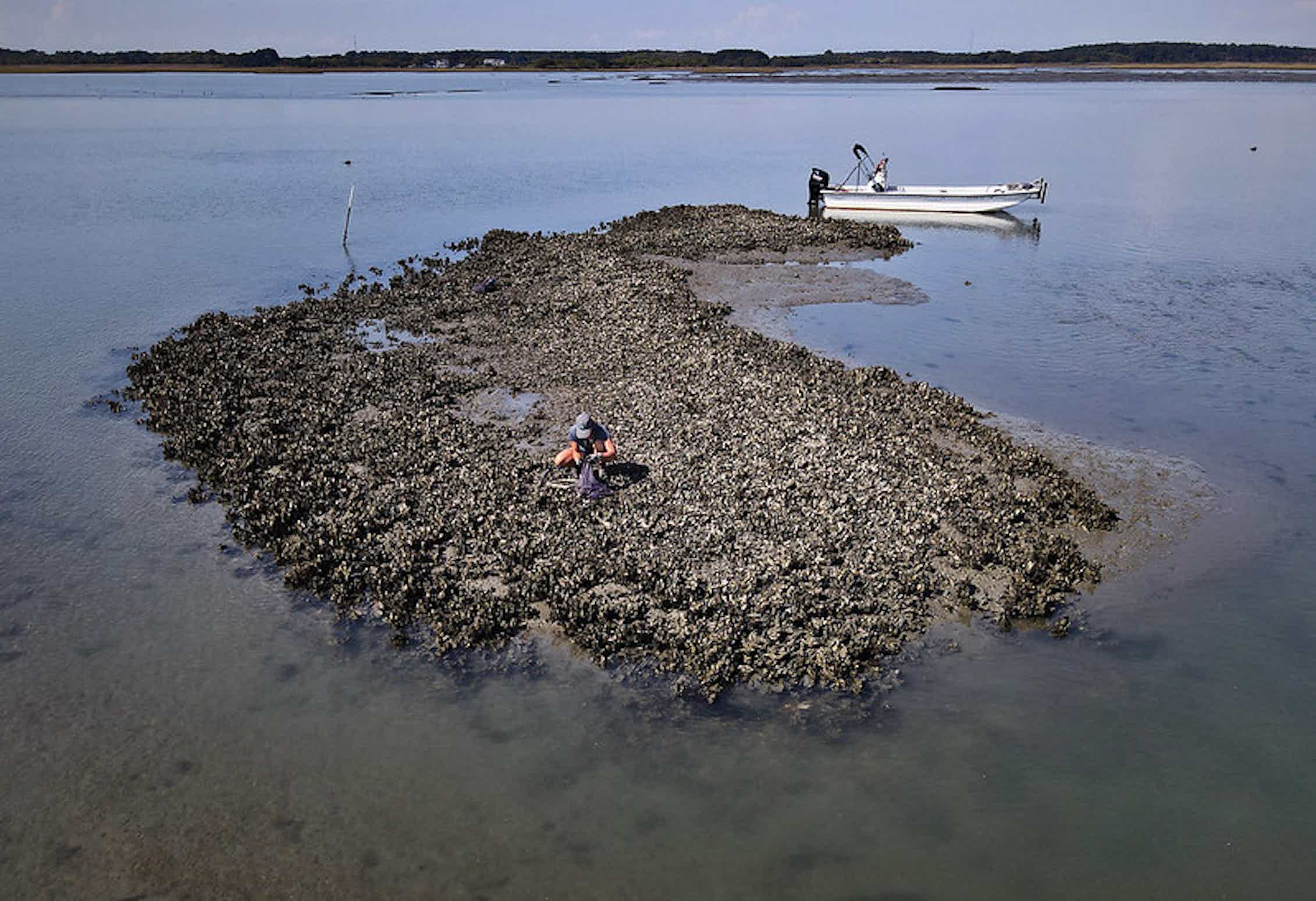 In science, there’s no such thing as a silver bullet and there are potential downsides. It wouldn’t help if we drew all larval oysters to our sites at the expense of others – or if we attracted predators in large numbers.

But if we do this carefully, these techniques could help re-establish the invisible acoustic highways of the sea – and turn the deathly quiet of many coastal waters back into vibrant, noisy and healthy oyster reefs.

Dominic McAfee is a postdoctoral researcher in marine ecology at University of Adelaide.

Brittany Williams is a PhD candidate at University of Adelaide.

Lachlan McLeod is a PhD candidate at University of Adelaide.

Sean Connell is a professor and program director of the Stretton Institute at University of Adelaide.

This article appears courtesy of The Conversation and may be found in its original form here.

The opinions expressed herein are the author’s and not necessarily those of The Maritime Executive.