Royal Caribbean International asks guests to arrive an hour later than their scheduled embarkation time for cruises onboard Allure of the Seas from Galveston.

In a letter addressed to guests booked onboard, the cruise line says this will allow the smooth debark processes from previous sailings.

Allure of the Seas sails from Royal Caribbean’s new cruise terminal in Galveston, which was only recently opened. Whether the later embarkation and debarkation timings are due to issues at the terminal or new ship processes is unclear. However, the cruise line does state the importance of coming at the new time due to the limited space inside the new terminal.

Allure of the Seas Guests Asked to Arrive One Hour Later

Those who booked a cruise onboard Allure of the Seas sailing from Galveston are asked to arrive one hour later than their previously scheduled timeslot. It’s essential to come during this new arrival time, as space in the terminal is limited and can only accommodate a specific number of guests.

Those who arrive earlier will be turned away and asked to return during their new time to avoid overcrowding in the terminal. Allure of the Seas‘ guests must be onboard by 4 PM, with the vessel setting sail at 5 PM.

A letter sent to guests states: “To allow additional time to complete the debark process from our previous sailing, we kindly ask that you arrive 1 hour after your previously selected arrival time. All guests should plan to arrive no later than 4:00 PM, and we’ll now set sail at 5:00 PM.”

“It’s extremely important to arrive during your new arrival time on boarding day. Space in the terminal can only accommodate a specific number of guests, so those who arrive sooner will be turned away and asked to return during their new time to avoid overcrowding in the terminal.”

Those guests who choose to disregard the letter will be sent away by Royal Caribbean and will have to wait outside the terminal until their new timeslot:

“Arriving early may also mean that you’ll have to wait outside of the terminal in all types of Texas weather conditions. If you haven’t already selected a time yet, we kindly ask you to please visit our app and complete your online check-in.”

Guests are encouraged to check with the cruise line whether their embarkation timing is affected by the new procedures.

It seems unlikely that the new embarkation timings have anything to do with Royal Caribbean’s new 161,334-square-foot cruise terminal in Galveston. The facility has been hailed as a groundbreaking cruise terminal built to process thousands of guests as efficiently as possible.

Using facial recognition software for passport controls, most guests reported being onboard within 10 minutes of entering the new Terminal 3.

However, there are reports that Royal Caribbean requires cabin stewards to take on more cabins, which would require more time for turnover. This would indeed explain the later embarkation and sailing times.

Or, it could just be that Royal Caribbean is offering guests a more relaxed debarkation process, as debarkation times have also been pushed back with the last slot at 10:30 AM. It’s worth noting that the debarkation process can take some time, as there are many guests to process and a lot of luggage to be unloaded from the ship.

Allure of the Seas is the fifth-largest cruise ship in the world. At 225,282 gross tons, the cruise ship is the largest vessel to ever sail from Galveston, offering guests four, five, and seven-night cruises to the Western Caribbean, calling on Cozumel, Roatan, and Costa Maya. Allure of the Seas will continue operating from Galveston Through October 22, 2023. After that date, the cruise ship will reposition to Port Canaveral. 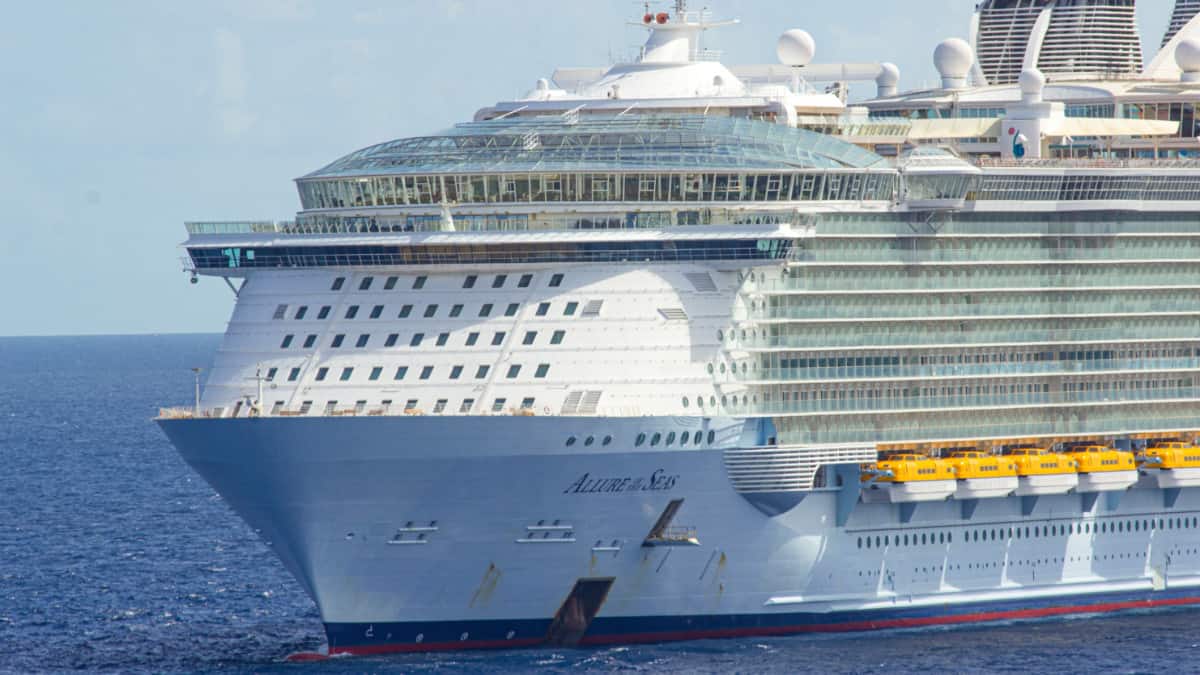 How United Premier members can request a complimentary luggage tag

Revealed: The thrills, chills and spills on board Royal Caribbean’s new record-breaking ship, Icon of the Seas